Cake.Issues - A suite of addins for issue handling in Cake

While some linting tools provide nice reporting capabilities, others don't. Some build systems provide tasks to report issues into pull requests. But if you're using another build system your out of luck. Maybe you found a new nice linting tool which does exactly what you need, but probably it won't integrate well with your existing other linting tools.

The Cake.Issues addins tries to solve this, by providing a common and extensible infrastructure for issue management in Cake build scripts.

Unlike other Cake addins, the Cake Issues addin consists of over 10 different addins, working together and providing over 50 aliases which can be used in Cake build scripts to work with issues. The addins are built in a modular architecture and are providing different extension points which allows to easily enhance them for supporting additional analyzers, linters, report formats and code review systems.

In the following examples we assume a Visual Studio solution, containing some Roslyn Analyzers, which we want to build and additionally run JetBrains InspectCode on it.

For creating an XML log from MsBuild we need the XmlFileLogger class from the MSBuild Extension Pack and the JetBrains InspectCode tool:

Now we can use the aliases provided by Cake out of the box to build the solution and run JetBrains InspectCode resulting in two log files containing the issues:

The Cake.Issues addin now allows you to parse the generated log files and retrieve the issues in a common structure. The addin provides aliases for reading issues and can be used to aggregate issues from different sources. This can for example be useful to break builds based on the reported issues.

To read the issues we need to import the following core addin:

We also need to import at least one issue provider. Issue provider are separate addins which can provide issues from a specific linter or tool. The issue provider documentation gives an overview of available issue providers including samples how to integrate them in a Cake build script.

In the following example the issue providers for reading warnings from MsBuild log files and from JetBrains InspectCode are imported:

Finally we define a task where we call the core addin with the desired issue providers. The following example reads the reported issues with comments formatted as Markdown:

With the issues from the different tools in a common format it is now possible to create reports out of it. The Cake.Issues.Reporting addin provides the required aliases for this. The concrete reporting format is defined in separate report format addins.

The following example will create a HTML report of the issues: 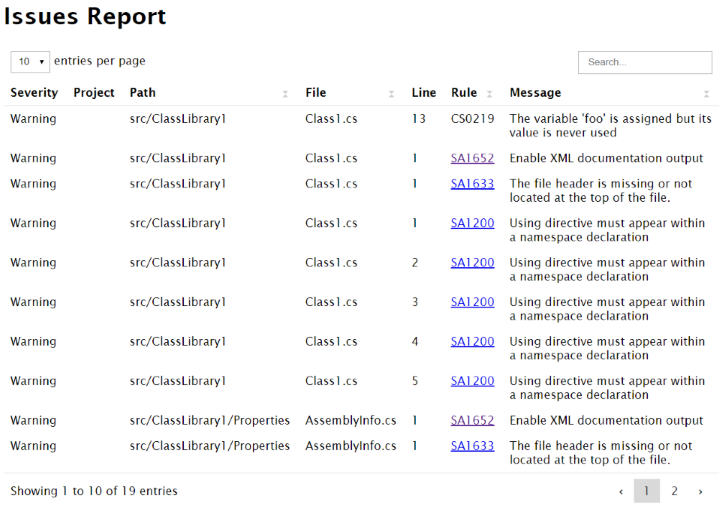 The addin provides some out of the box templates, but you can also pass your own custom template in which you can do whatever RazorEngine is capable of doing.

The following example will report issues as comments to Team Foundation Server:

The result will look like this in Team Foundation Server: 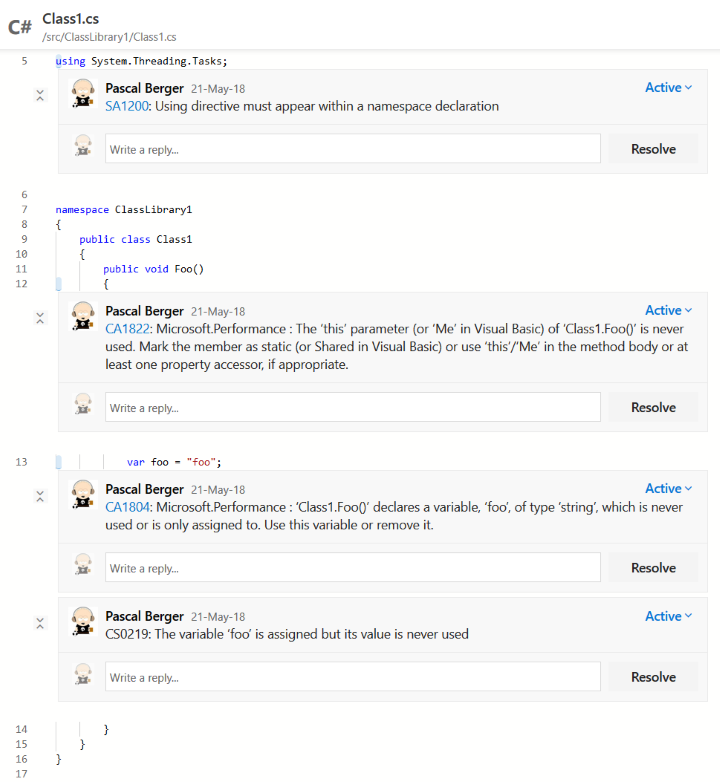 My name is Pascal Berger. I'm working as a Software Architect at BBT Software AG. You can find me on Twitter or GitHub.